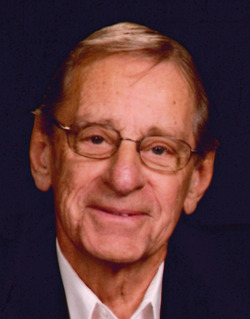 
Inwood, IA: Leonard E. Kaskie, 81, of Inwood, Iowa, died Friday, August 18, 2017 at Fellowship Village in Inwood following a long journey with cancer. Mass of Christian Burial will be held Thursday, August 24, at 11:00 AM at St. Dominic’s Catholic Church in Canton, South Dakota with Father Jordan Samson officiating. Following a luncheon, burial of cremated remains will be held at St. Mary’s Catholic Cemetery in Rock Valley, Iowa. Visitation will be held Wednesday, August 23, from 5:30-7:00 PM at Porter Funeral Home in Inwood. A prayer service will follow at 7:00 PM with Pastor Rob Horstman officiating.

Leonard Eugene Kaskie, son of Leo and Kathryn (Grant) Kaskie, was born January 18, 1936 in Rock Valley, Iowa. Leonard was a graduate of Rock Valley High School. On June 8, 1963 Leonard was united in marriage with Dolores Soldatke at St. Joseph’s Cathedral in Sioux Falls, South Dakota. Together the couple lived in Rock Valley. They later lived in Sutherland, Iowa until returning to Rock Valley in 1990. Due to Dolores' illness, Leonard and Dolores moved to Inwood in 1998, where Dolores lived at Fellowship Village and where she died on December 13, 2001. Later Leonard found a dear companion in Jan Hamann and they dearly enjoyed their time together.

Leonard was very much a people person. He enjoyed meeting all kinds of people in his different vocations. Leonard worked as a salesman for the Thornburg Company in Rock Valley, ran the Upstairs, Downstairs Tavern in Sutherland, had Wink’s Pub in Rock Valley, managed the Super 8 Motel in Rock Valley, and spent the last 15 years with Porter Funeral Home as a funeral director’s assistant. He also spent lots of time speaking at Keystone Treatment Center and helping people who struggle with alcohol and drug abuse. Leonard was a friend of Bill W.

In the last couple years, as Leonard began his journey with Cancer, he was overwhelmed by the support, visits, phone calls, cards, and gifts he received from so many people. He was very appreciative and humbled by everyone’s kindness. Leonard was very grateful for the care and compassion shown to him the last few weeks by the staff of Fellowship Village in Inwood. He also wanted to thank his niece and her husband, Marilyn and Marlyn Jacobsen, for their unbelievable help and care over the last several months.

To order memorial trees or send flowers to the family in memory of Leonard Kaskie, please visit our flower store.