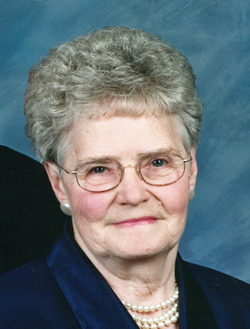 Rock Valley, IA: Loraine Vande Kamp, 86, of Rock Valley, Iowa, died Sunday, January 15, 2017 at the Prairie View Home in Sanborn, IA. Memorial services will be held Thursday, January 19, at 11:00 a.m. at First Christian Reformed Church of Rock Valley with grandson Rev. Nick Alons officiating alongside Rev. Matt Haan. A private graveside service will occur at Valley View Cemetery of Rock Valley. Visitation, with the family present, will be Wednesday, January 18, at First Christian Reformed Church of Rock Valley from 5:30-7:00 p.m. Condolences may be sent online to www.porterfuneralhomes.com. All memorial gifts received will be given to the Alzheimer’s Association, www.Alz.org.

Loraine was devoted as a wife and mother. She poured her energy into the lives of her children and grandchildren and also served as a care giver for infants Sandra and Brenda Bakker. After her children were grown, Loraine held part-time jobs including making beautiful flower arrangements, and spotlessly cleaning city offices, the library, and Rock Valley Christian School. Leisure hours were spent reading, baking, and crocheting keepsakes for grandchildren. After retirement, she and Hilbert travelled many miles to enjoy activities of children and grandchildren. She will be remembered for her devotion and willing service to others.

To order memorial trees or send flowers to the family in memory of Loraine Vande Kamp, please visit our flower store.