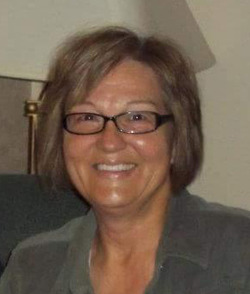 
Larchwood, IA: Lori Lyn Calsbeek, 61, of Larchwood, Iowa, passed away unexpectedly on Sunday, December 11, 2016 at Avera McKennan in Sioux Falls, South Dakota. Visitation, with the family present, will be held Thursday, December 15, at Porter Funeral Home in Rock Valley from 5:00-8:00 p.m. Private family services will be held on Friday, December 16. Memorials may be given to the Sioux Falls Humane Society (sfhumanesociety.ejoinme.org).

Lori Lyn (LaFrenz) Calsbeek, daughter of Henry C. and Anna “Louise” (Klutman) LaFrenz, was born December 7, 1955 at Valley Springs, South Dakota. Lori attended Central Lyon Community School in Rock Rapids, Iowa. She was united in marriage with Sherwyn Calsbeek on June 3,1982. The couple made their home in Rock Valley, Iowa and later moved to Hartford, South Dakota, before settling in Larchwood, Iowa. Lori worked at Montrose Vet Clinic for many years and was currently working at Midwest Livestock in Larchwood.

Lori had many hobbies. She enjoyed watching dirt track racing, NASCAR, golfing, camping, and Hallmark movies. She was a master Candy Crush player and had a great love for animals. Lori’s greatest joy though was being a “fun” grandma. She would have pillow fights and played ball tag with the grandchildren.

To order memorial trees or send flowers to the family in memory of Lori Calsbeek, please visit our flower store.