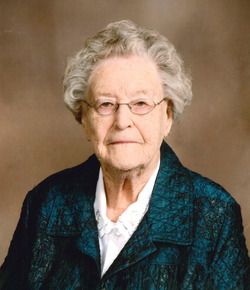 Lucille Hoekstra was born August 26, 1926 on the family farm near Doon, Iowa, the daughter of Jacob and Lucy (Buwalda) Gorter. She attended country school east of Doon through the 8th grade. Lucille worked on her parent’s farm and as a waitress in Rock Rapids, Iowa.

She married John P. Hoekstra on November 18, 1948 in Doon. They farmed east of Doon and then north of town as Lucille worked with John on the farm and with milking cows. They retired into Doon in 1990. John died on May 31, 2009.

To order memorial trees or send flowers to the family in memory of Lucille Hoekstra, please visit our flower store.