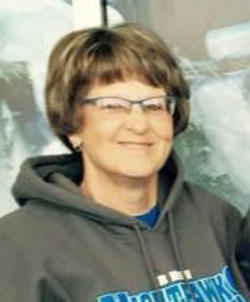 Inwood, IA: Marcia Rozeboom, 63, of Inwood, IA, died Saturday, December 10, 2016 at Dougherty Hospice House in Sioux Falls, SD. Memorial services will be held Thursday, December 15, at 11:00 AM at Inwood Christian Reformed Church with Rev. Sam Krikke officiating. Prior to the memorial service, a prayer service will be held at Inwood CRC at 9:00 AM Thursday with burial following at Valley View Cemetery of Rock Valley, IA. Visitation, with the family present, will be Wednesday, December 14, from 5:30-7:30 PM at Inwood CRC.

Marcia Kaye (Cleveringa) Rozeboom was born September 26, 1953, to Roger and Esther (Vanden Bosch) Cleveringa. She was raised on the family farm north of Rock Valley, IA, attended both Inwood Christian School and Western Christian High School graduating in 1967 and 1971 respectively. She married Leroy Rozeboom on September 22, 1972, and made their home in Fairview, SD, and Canton, SD, before settling in Inwood, IA. Marcia received her LPN Degree in 1972 and held various jobs throughout her nursing career, her longest being with the Canton Inwood Hospital where she worked from 1974 to 1985. In 2000 Marcia went back to school and received her RN degree at Excelsior College (Albany, NY) in 2007. She worked at the Avera GI clinic up till 2014 when she retired due to her illness.

Marcia was a very active community volunteer serving in numerous capacities. She was a member of the Inwood Rescue for the past 30 years and in 2013 received the Inwood Community Volunteer of the year award. She was an active member of the Inwood Christian Reformed Church serving as GEMS and Awana leader, on the church praise team, in the choir, taught Sunday School, and played piano for services. She enjoyed quilting, gardening, fishing, attending her grandchildren’s events and cooking for the family for Sunday dinners.


To order memorial trees or send flowers to the family in memory of Marcia Rozeboom, please visit our flower store.