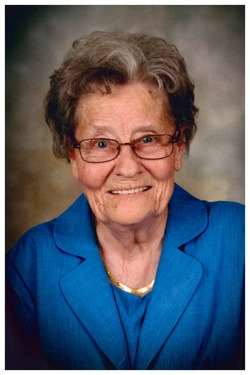 ROCK VALLEY, IOWA – Marian J. Groeneweg, 91, of Rock Valley, passed away suddenly on Friday, September 14, 2018 at the Hegg Health Center in Rock Valley. Funeral Service will be 10:30 a.m. Tuesday, September 18, 2018 at the Porter Funeral Home in Rock Valley with Rev. J.J. Witvoet officiating. Burial will follow in the Valley View Cemetery, with a luncheon to follow at the Senior Citizen’s Center located at Whispering Heights. Visitation with the family present will be from 5:30 p.m. to 7:30 p.m. Monday, September 17th at the Porter Funeral Home in Rock Valley. The family prefers memorials be directed to the Netherlands Reformed Christian School, Hegg Health Center, or the charity of your choice.

Marian Joan Groeneweg was born September 22, 1926 in Hull, Iowa, the daughter of Henry and Nellie (Van Surksum) De Jongh. She was united in marriage to John B. Groeneweg on February 19, 1947 at Rock Valley, Iowa. Together they farmed northeast of Rock Valley. They moved into town in 1982 and in 2013 they moved to Pleasant Acres Care Center in Hull, Iowa. John passed away on May 3, 2017. Marian made her home at Whispering Heights in Rock Valley where she made many friends and enjoyed doing many activities.

Marian was a member of the Netherlands Reformed Congregation. She enjoyed living on the farm with milking cows and having a large garden. She enjoyed going on rides in the countryside with John and later going on rides with others at Whispering Heights. Marian liked to crochet, make quilts, canning her many vegetables, putting together puzzles, and loved being visited by her grand and great-grandkids.

She was preceded in death by her parents; husband of 70 years, John B. Groeneweg; infant daughter, Marlys Groeneweg; granddaughter, Rebecca Den Boer; and 2 sisters and their husbands, Norma (Leonard) Risseeuw and Verla (Harold) Ten Haken.


Memorial Donations Memorial donations can be made to:
Netherlands Reformed Christian School or Hegg Health Center

To order memorial trees or send flowers to the family in memory of Marian Groeneweg, please visit our flower store.