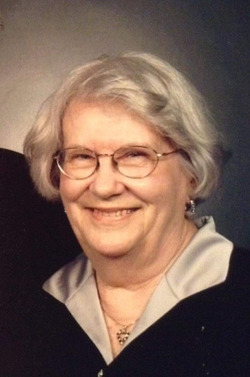 Funeral Service will be 10:30 a.m. Tuesday, April 18, 2017 at the St. Paul’s Lutheran Church in Ireton, Iowa with Rev. Michael Boothby officiating. Burial will follow in the Pleasant Hill Cemetery in Ireton. Visitation will begin at noon Monday, with the family present beginning at 6:00 p.m. and a Prayer Service at 7:00 p.m. at the church. The Porter Funeral Home is assisting the family. Condolences may be sent to www.porterfuneralhomes.com. The family prefers memorials be directed to the West Sioux Educational Foundation.

Marilyn C. Rostermundt was born December 23, 1930 in Manning, Iowa, the daughter of Fred and Alice (Lohmeier) Grau. She graduated from Manning High School in 1948.

Marilyn married Merlin Rostermundt on November 23, 1950 in Arcadia, Iowa. They lived in Fairfield, Iowa where she was employed in the office at Fairfield Glove Company. The family moved to Westside, Iowa in 1956. They moved to Ireton, Iowa in 1961 when Merlin took a principal position with West Sioux Schools.

She was a member of St. Paul’s Lutheran Church and the LWML. She served on the Altar Guild for many years and had made many of the church banners. Marilyn enjoyed being a seamstress, crocheting, playing dominoes, camping, and spending time with her family. She and Merlin had wintered in Texas for 21 years.

She was preceded in death by her parents; an infant daughter, Marla; a son-in-law, Will Verros; and her mother-in-law, Marie Nulle and her husband Fred.

To order memorial trees or send flowers to the family in memory of Marilyn Rostermundt, please visit our flower store.