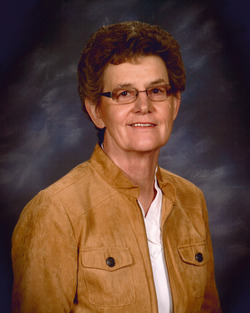 
IRETON, IOWA – Marjorie (Marge) Sue Van Driel, 74, of Ireton, passed away on Wednesday, August 22, 2018 at her residence under hospice care.

Funeral Service will be 10:30 a.m. Monday, August 27th at the First Reformed Church in Ireton, Iowa with Rev. Doug Van Aartsen officiating. Burial will follow in the Pleasant Hill Cemetery. Visitation with the family will be from 5:00 p.m. to 7:00 p.m. Sunday, August 26th at the church. The Porter Funeral Home is assisting the family. Condolences may be sent to www.porterfuneralhomes.com.

Marjorie (Marge) Sue (Van Engen) Van Driel was born on September 30, 1943 the daughter of John and Gertrude (Termaat) Van Engen, on a farm near Hills, MN.

On March 19, 1965, she married Arlin Van Driel and they moved onto the family farm near Ireton, IA. Arlin passed away on June 1, 2008. Shortly after Arlin’s passing, Marge moved into a house in Ireton, where she resided until her death.

She was an active member of the First Reformed Church of Ireton and volunteered for many organizations in the community. Her hobbies included sewing, gardening, and baking.

To order memorial trees or send flowers to the family in memory of Marjorie "Marge" Van Driel, please visit our flower store.