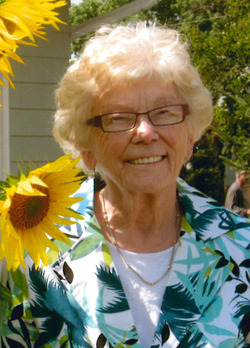 Marlys worked at the Corner Café in Rock Valley; The Candy, Ice Cream and Cigar Store in Worthington, Minnesota and Council Oak Grocery in Rock Valley. While working at the grocery store, she always ate lunch at the Corner Café. Eventually the owners, George and Clara Schouten asked her to work for them. She accepted. After WWII, their handsome son came home and also worked for George and Clara. Marlys and Bud became friends and soon started dating but kept the relationship a secret. George kept asking Marlys who Bud was dating! It was an interesting experience, to have your bosses become your in-laws. Clayton and Marlys were married on April 30, 1949.

They farmed near Rock Rapids for two and a half years and then bought their own farm near Hawarden. In 1953, they had sale and moved to California. They purchased a Flying A gas station in Mountain View but they lived in Sunnyvale. As parents, they decided they wanted to raise their kids in Iowa. In 1956 they moved to Sioux Falls where Clayton ran a liquor store. A better business opportunity came up a year or so later and they purchased Tiny’s Corner, rural Doon. It was a gas/service station with a lunch counter. Later, Clayton worked as a rural mail carrier and the family moved into a home in Doon. In 1981, they bought their home in Rock Valley. Clayton died September 26, 1982. Marlys continued to live in their home in Rock Valley. Marlys married Ben Groeneweg on February 14, 1986. Ben died February 8, 2016. Marlys moved into Whispering Heights in August of 2016.


To order memorial trees or send flowers to the family in memory of Marlys Schouten Groeneweg, please visit our flower store.