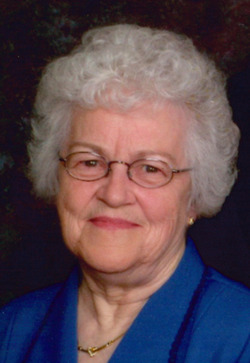 
Rock Valley, IA: Martha (Boon) De Jager, 86, of Rock Valley, Iowa, went to be with her Savior Jesus Christ on Tuesday, November 28, 2017. She died at Rock Rapids Health Center in Rock Rapids, Iowa. Funeral services will be held Saturday, December 9, at 10:30 AM at First Christian Reformed Church of Rock Valley with Rev. Matthew Haan officiating. Burial will follow at Valley View Cemetery of Rock Valley. Visitation, with the family present, will be held Friday, December 8, from 5:00-7:00 PM with a time of sharing beginning at 7:00 PM at the church. Condolences may be left for the family at www.porterfuneralhomes.com. The family prefers memorials be directed to Christian Worship Hour PO Box 2002, Aberdeen, South Dakota 57402.

Martha was born August 26, 1931 in Doon, Iowa to Marinus and Hattie (Van Bimmel) Boon. She attended school through eighth grade. Upon graduation she became a housemaid and then worked at a Rock Valley grocery store where she met Bernard “Bernie” De Jager, her future husband. In March of 1954 they were married at the First Christian Reformed Church at Rock Valley.

They farmed together near Doon and later southwest of Edgerton, Minnesota. They were blessed with five children during their marriage. Having great devotion for God, Martha raised her children by reading to them from the Bible or Bible stories. Her children lovingly remember her singing her beloved hymns while playing the piano. The music she so enjoyed with her brothers and sisters growing up continued with her throughout her life.

To order memorial trees or send flowers to the family in memory of Martha De Jager, please visit our flower store.