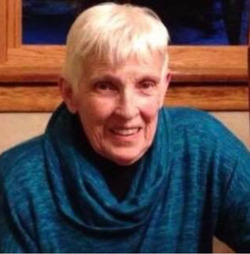 
Mary Ellen Miller, 83, of Hudson, SD died Saturday, December 30, 2017 at Sanford Canton-Inwood Medical Center. Visitation with the family will be Friday, January 5, 2018 from 5:30-7 p.m. followed by a prayer service at 7 p.m. at the Porter Funeral Home in Rock Valley, IA. Mass of Christian Burial will be held at 10:30 a.m. Saturday, January 6, 2018 at the St. Mary’s Catholic Church in Rock Valley with Father Roger Linnan officiating. Lunch will be served following the service at the Hudson Community Center. Private family inurnment will be at Eden Cemetery at Hudson. Condolences may be sent to www.porterfuneralhomes.com.

Mary Ellen Kohls, the daughter of George and Irene (Gourley) Kohls was born February 7, 1934 in Lesterville, SD. She attended school in Lesterville, Geddes, SD, and Mapleton, IA. When her dad died suddenly, the family moved to Hudson, SD where she attended and graduated from Hudson High School.

Mary went on to St. Joseph’s School of Nursing in Sioux City, IA. She attended school until February 20, 1954 when she married Merlyn (Mike) Miller in Rock Valley, IA. They made their home on a farm just west of Hudson where they were actively involved in the day-to-day operation of their farm and the Hudson community. Mary also worked a couple of years (1969-70) as Dr. Myer’s nurse at the clinic in Hudson.

Mary returned to school at Southeast Area Vo-Tech school where she completed her training as a licensed practical nurse in the spring of 1983. She worked at Colonial Manor Nursing Home in Hudson from 1983 until her retirement in 2007. She loved her job, and one of her favorite responsibilities was training the many CNAs who were employed during her time there.

Mary was a member of St. Mary’s Catholic Church in Rock Valley where she was active in committee work and the teaching of CCD to junior high students. In Hudson, she took pride in her community and freely gave of her time when it involved improving her corner of the world. She was a proud Hudsonite who volunteered with the Hudson Ambulance, Meals-on-Wheels, the Hudson Recreation Board, the Library Board, the Crop Show Board and committees, the PTA, and canvassing for the Lincoln county Democratic Party. She was a member of Study Club, the Lincoln County Extension Club, Book Club, Prairie Planters, the American Legion Auxiliary, and the Colonial Manor Auxiliary. In her free time, she enjoyed gardening, cross-stitching, traveling the world with Mike, and spending time with her family—especially her grandchildren and great-grandchildren. She was a voracious reader, and was not afraid to argue for what she truly believed.

She is preceded in death by her parents; a sister, Rose Moeller; and brother-and-sister in law, Ken and Maxine Miller.

To order memorial trees or send flowers to the family in memory of Mary Miller, please visit our flower store.