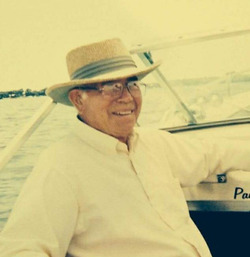 Services will be held at 10:30 a.m. Tuesday, January 22 at St. Mary’s Catholic Church in Rock Valley, Iowa with Father Douglas Klein and Father Roger Linnan officiating. Lunch will be served following the service at the Hudson Community Center. Visitation with the family will be Monday, January 21 from 6-7 p.m. followed by a 7 p.m. prayer service and Masonic service at the Porter Funeral Home in Rock Valley, Iowa.

Merlyn, the son of Carl and Ella Miller was born June 16, 1926 in Hudson, SD. He attended school in Hudson, and graduated from Hudson High School in 1944. He worked with his father farming their land in South Dakota and Iowa, and working summers at the wheat ranch in Kimball, Nebraska for a couple of years after high school. In the fall of 1946, Mike enrolled in the University of Nebraska in Lincoln to pursue a degree in geology. He was active in Sigma Gamma Epsilon and L.S.A. while in college, graduating in June, 1950.

Mike returned to farming after graduation and was drafted into the Army in October of 1950. He was traveling to his duty assignment in Korea when he fell ill and was taken to Letterman Army Hospital in San Francisco where he remained for six months. He was later assigned to office duties in Okinawa where he worked until his discharge in October of 1952.

Mike married Mary Ellen Kohls on February 20, 1954 in Rock Valley, IA. They made their home on a farm just west of Hudson where they were actively involved in the day-to-day operation of their farm and the Hudson community.

Mike was a member of the Hudson Lutheran Church for many years and later joined the Catholic faith and became a member of St. Mary’s Catholic Church in Rock Valley where he enjoyed attending masses with Mary and other family members. In Hudson, Mike took pride in his community and gave freely of his time to several organizations there. Education was important to Mike, and he was a member and chairman of the of the school board for Hudson Schools for 16 years. Mike was also a member of Jeptha Masonic Lodge and El Riad Shrine where he enjoyed the friendship of his brothers and mentoring new members. He served on the board of directors with the State Bank of Hudson and later Premier Bank, and was a member of Bergstrom-Bodeen American Legion Post 128. Mike was a proud Hudsonite, and fought for the causes that he knew would benefit the community.

He was preceded in death by his parents, Carl and Ella; wife, Mary; brother-and-sister in law, Ken and Maxine Miller, and sister-in-law, Rose Moeller.

To order memorial trees or send flowers to the family in memory of Merlyn "Mike" Miller, please visit our flower store.