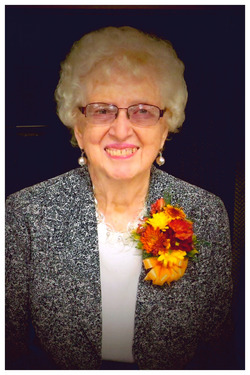 Funeral Service will be 10:30 a.m. Tuesday, November 28, 2017 at the First Reformed Church in Ireton, Iowa with Rev. Doug Van Aartsen officiating. Burial will follow in the Pleasant Hill Cemetery. Visitation will begin at noon Monday, with the family present from 5:00 p.m. to 7:00 p.m. Monday at the Porter Funeral Home in Ireton. Condolences may be sent to www.porterfuneralhomes.com.

Mildred Van Donge was born September 13, 1926 near Maurice, Iowa, the daughter of H.E. and Mary (Borgman) Ten Napel. She graduated from the Ireton, Iowa High School in 1943.

Mildred married Edward Van Donge January 1, 1945 at Ireton. The couple farmed near Craig, Iowa until moving to Ireton in 1979. Ed passed away February 26, 1991. Mildred moved to Sioux Falls, South Dakota in 2002. She attended the Community Reformed Church in Sioux Falls and enjoyed singing in the church Christmas Choir Cantata.

Mildred was an excellent seamstress, often making clothing for her family, dresses for family weddings, and decorated sweatshirts. She was a wonderful cook, liked to bake, and enjoyed gardening. She was always a positive person and supported the churches she attended.

Mildred loved all of her family. One of her grandchildren wrote this about her grandmother, “She lived a life full of faith, compassion, grace, and unconditional love.”

To order memorial trees or send flowers to the family in memory of Mildred Van Donge, please visit our flower store.