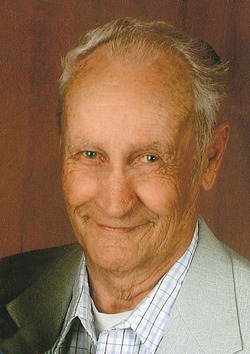 Millard was born August 5, 1927, in Tea, South Dakota to Harm and Veronica (Stribley) Hyronemus. He lived and attended school in Tea until enlisting in the U.S. Army during World War II. Millard was stationed in the Philippine Islands and then Korea. He married Mildred (Millie) Johnson on September 25, 1950, at the Springdale Lutheran Church in Canton, South Dakota. Millard worked at John Morrell and Tri-State Transportation in Sioux Falls. He also worked as a farm laborer for many years and then retired in Rock Valley. Millard enjoyed playing guitar, golf, and bingo at various area bingo halls.

To order memorial trees or send flowers to the family in memory of Millard Hyronemus, please visit our flower store.