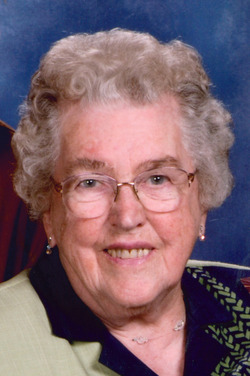 Minnie spent many hours doing "fancy work", constructing and sewing many beautiful quilts, along with many precious keepsakes that are treasured by family and friends. She also enjoyed sharing the bounty of her homemade bread and pies with anyone that was fortunate enough to stop by. All her life she was very active in her church. With her joy for music, she enjoyed singing in the church choir, and continued participating at chapel and hymn sings while residing at Whispering Heights.

Minnie treasured all the time that she was able to spend with her family, including her children and stepchildren. She loved to share stories from her past while having a cup of tea and a cookie. Another thing she and John enjoyed was fixing jigsaw puzzles with anyone that stopped in to visit.

She was preceded in death by two husbands, granddaughter, son in law, her parents and her three siblings.

To order memorial trees or send flowers to the family in memory of Minnie Den Boer, please visit our flower store.