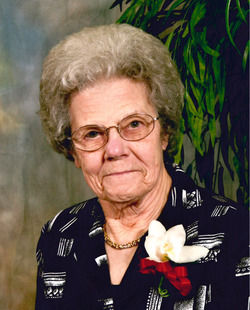 Funeral Service will be 9:30 a.m. Tuesday, December 19, 2017 at the Porter Funeral Home in Rock Valley with Rev. E.C. Adams officiating. Burial will follow in the Valley View Cemetery in Rock Valley. Visitation with the family will be one hour prior to the service and at the luncheon following the committal service. Condolences may be sent to www.porterfuneralhomes.com.

Minnie “Myrt” Keizer was born January 20, 1923 at Inwood, Iowa, the daughter of Arie and Willemina (Beukhof) Kelderman. She worked at the John Morrell Company in Sioux Falls, South Dakota during the war. Minnie married William “Bill” Keizer, Jr. on November 19, 1952. The couple farmed in the Sioux Falls area. Bill passed away on October 22, 1964. The family then moved southeast of Inwood, Iowa.

Following Bill’s death, Minnie began working as a nurse’s aide at the Valley Manor Nursing Home in Rock Valley, Iowa, where she worked for 20 plus years. Following retirement, she began being a Foster Grandparent. She was a member of the Netherlands Reformed Congregation and enjoyed doing embroidery, word puzzles, and picture puzzles.

To order memorial trees or send flowers to the family in memory of Minnie "Myrt" Keizer, please visit our flower store.