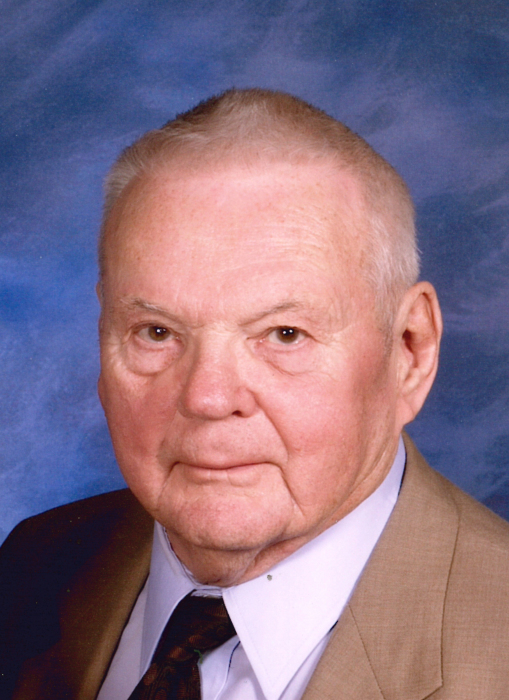 Rock Valley, IA: Osborne “Ozzie” Liaboe, 93, of Rock Valley, Iowa, died Sunday, April 19, 2020 at Hegg Health Center in Rock Valley. Due to the COVID-19 pandemic and the state and federal guidance on gatherings of no more than 10 people, Ozzie’s family will be holding a private family graveside service at Valley View Cemetery of Rock Valley on Wednesday, April 22 with Pastor Edward Pease officiating. Public viewing, with no family present, and limited to 10 people at a time, practicing social distancing, will be at Porter Funeral Home in Rock Valley from 12:00 to 7:00 PM, Tuesday, April 21. Memorials may be directed to Our Savior’s Lutheran Church of Rock Valley.

Osborne Curtis Liaboe, son of Ole and Clara (Johnson) Liaboe, was born May 8, 1926 in Irene, South Dakota. Osborne was united in marriage with Marilyn Andersen on November 21, 1950.

Osborne “Ozzie” graduated from Irene High School in 1944 and entered the United States Army Infantry where he served as a machine gunner in the Battle of the Bulge during World War II. He was awarded the Bronze Star.

Upon returning to South Dakota, he planned to work with his father in the Liaboe Garage. His mother had other ideas, and she escorted him to college where he earned a BA in chemistry from Augustana College in Sioux Falls, South Dakota in 1950. He completed his Master’s Degree in school administration from the University of South Dakota in Vermillion, South Dakota.

The next three years were spent teaching high school in rural South Dakota, residing one year in Iroquois and two years in Brandon, where he found himself instructing students in everything from math and chemistry to foreign language and instrumental music. He then accepted the position of K-12 principal in Rock Valley in 1953. In1972, his job at Rock Valley Community School changed to principal of grades 7-12, where he remained until his retirement in 1991. During his early years in Rock Valley, he also was a classroom teacher of mathematics, physics, and chemistry. He gradually shed these classroom duties, usually just prior to one of his children enrolling in one of his classes.

Ozzie was also active in the community. He was a founding member of Our Savior’s Lutheran Church, where he was a member of the church council and the church choir. Civic memberships included the Rotary Club, the Rock Valley Golf Course, the VFW, the American Legion, and Rock Valley Variance Committee.

In retirement, Ozzie loved to travel with Marilyn. For many years they spent winters in Arizona. The two of them also cherished time spent with children, grand-children, great grand-children, and friends, many of whom were close enough to visit frequently and even engage in friendly games of cribbage or poker on a regular basis.

Ozzie spent the last several years of his life in the care of the fine staff of Whispering Heights in Rock Valley.

He was preceded in death by his wife Marilyn, his parents Ole and Clara, his brother Wendell, and his sister-in-law Darlene Liaboe.

To order memorial trees or send flowers to the family in memory of Osborne "Ozzie" Curtis Liaboe, please visit our flower store.

The Chapel of Bright Funeral Home