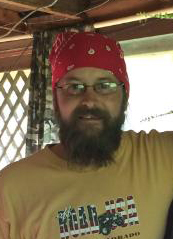 Quinn was born on February 17, 1971 to Sandy (Williams) Rozeboom and Vernon Rozeboom. He graduated from Rock Valley Community School in 1989. His love of cooking took him to Culinary School. He loved being a chef. After battling Bipolar Disorder for years, he finally found his happy place in the hills of the Ozarks in Arkansas.

The loves of his life were his Pit Bulls, Maggie Mae and Ellie Mae, they didn’t even know they were dogs, let alone Pit Bulls!

Quinn is survived by his mother, Sandy Schlumbohm; his brother, Travis and wife Karisa; niece, Madi and nephew, Mason all of Rock Valley; and many aunts, uncles, and cousins.

To order memorial trees or send flowers to the family in memory of Quinnten Paul Rozeboom, please visit our flower store.