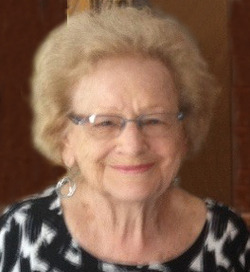 Funeral Services for Rachael E. (Rodine) Dow will be held on Thursday, April 20, 2017 at 10:30 a.m. at the United Methodist Church in Alma, Nebraska with Pastor Jim Bendorf officiating. Interment will be in the Alma Cemetery in Alma, Nebraska following the services.
Rachael E. (Rodine) Dow, beloved wife of Jerry, of Omaha, Nebraska (formerly of Hawarden, Iowa), passed away on Sunday, April 16, 2017 at the CountryHouse Residence in Omaha, Nebraska at the age of 89 years. She was born to Frank and Mabel (Larson) Rodine on August 9, 1927 in Wilcox, Nebraska. Rachael grew up and received her education in Hastings, Nebraska. She then pursued higher education, and graduated from Mary Lanning School of Nursing in 1948 as a Registered Nurse.
On April 10, 1949, she was united in marriage to Jerry Dow, a marriage that lasted over 66 years. She worked as Jerry went to college and until they started their family.
Rachael was a devoted spiritual and business partner with her husband, and was a loving mother. She was a long time P.E.O. member, hospital trustee and Associated Church member.
She enjoyed many years wintering in Arizona with her husband, and many friends and relatives. Playing cards was a passion, while golfing with Jerry was an occasional occurrence.
She was preceded in death by her husband, Jerry on July 25, 2015; son, Ron Dow; brother, Wallace Rodine and his wife, Dorothy; and sister, Vivian Lewis and her husband, Harlan.
Rachael leaves to celebrate her life; her son, Kenneth Dow and his friend, Lois of Muskegon, Michigan; and her daughter, Mary Lynn Grewe and her husband, Jim of Omaha; grandchildren: Brian and his wife, Lindsay, Lauren and her fiancé, Anthony, Kevin, Heather and Hannah; great-grandchildren: Gabriel and Laila; sister-in-law, Elma Jean Waggoner and her husband, Rolland of Republican City, Nebraska; and loved by many nieces and nephews, in-laws and friends.
Visitation will be held on Wednesday, April 19, 2017 from 4:00 – 8:00 p.m. with the family greeting from 5:00 p.m. – 6:00 p.m. at the Bauer-Torrey & Mach Funeral Home in Alma.
A memorial has been established in Rachael’s honor and kindly suggested to the West Sioux Foundation in Hawarden, Iowa or donor’s choice.
Expressions of caring and kindness can be sent to the family at www.nelsonbauerfh.com
The Bauer-Torrey & Mach Funeral Home in Alma is in charge of the arrangements.

To order memorial trees or send flowers to the family in memory of Rachael Dow, please visit our flower store.