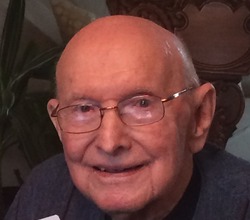 Ray Roland Potts, son of Jess and Marie (Pember) Potts, was born on November 19, 1921 in South Dakota. Ray and his family later moved to Rock Valley, Iowa. He attended the University of Iowa and graduated with a pharmaceutical degree. Ray proudly served in the United States Army during World War II and the Korean War. He married Eva “Peg” Walden and together the couple lived in Ames, Iowa until Peg's death. In 1971 Ray moved back to Rock Valley where he worked as a pharmacist at Pember Drug. Ray loved to golf and was a member of the Rock Valley Golf Club.

To order memorial trees or send flowers to the family in memory of Ray Potts, please visit our flower store.