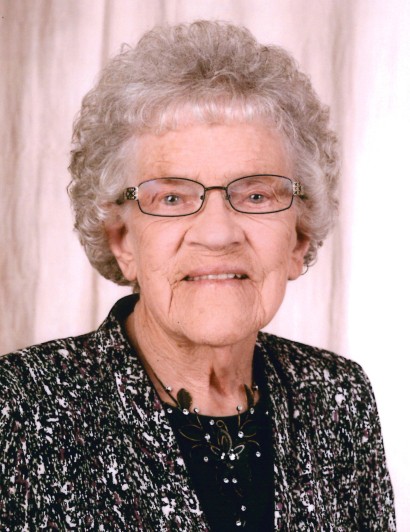 Rock Valley, IA: Rena Johanna Van Beek, 97, of Rock Valley, Iowa, died Thursday, May 13, 2021 at the Avera Heart Hospital in Sioux Falls, South Dakota. Funeral services will be held Wednesday, May 19, at 10:30 AM at Faith Reformed Church of Rock Valley with Rev. Bartel Elshout officiating. The service will be livestreamed at https://www.faithrv.com/. Burial will follow at Valley View Cemetery of Rock Valley. Visitation with the family present will be held Tuesday, May 18, from 5:30-7:30 PM at Faith Reformed Church. Memorials may be given to the Heritage Reformed Church Building Fund.    Rena Van Beek, daughter of Luke and Hilda (De Haan) Den Boer, was born on September 2, 1923. She was born and raised on a farm west and south of Rock Valley, known at that time as East Hudson, Iowa. She received her first eight years of education at the local country school, and after graduating from the eighth grade she attended the Rock Valley High School for one year. She helped on her parent’s farm doing a variety of labors, from milking cows to shocking oats and threshing grain. She also assisted families after a baby was born and helped clean houses.    Rena married Harry Van Beek on November 3, 1944, at her parent’s home. They moved to a farm north of Rock Valley, where they lived until moving to Rock Valley in 1989. They enjoyed traveling, visiting relatives and friends, and going on several tours. Because of health concerns, they moved to Heritage Estates in May, 2002. Rena dearly loved her family, and they were very important to her. She especially enjoyed time spent with her grandchildren, and they always got a hug from her when they left. She also spent many hours watching her grandchildren participate in school activities.    Rena was a member of the Heritage Reformed Church in Hull, Iowa. Her church family was also very important to her, and she enjoyed sending cards to all of them for their special occasions.    She is survived by her children, Hildonna (Tom) Vande Pol, Carolyn (Ken) Gacke, Al (Colleen) Van Beek and Kris (Brian) Vande Hoef; 11 grandchildren; 9 great grandchildren; brother, John Den Boer; sisters-in-law, Gert Den Boer, Wilma Van Beek and Henrietta Van Beek.    Rena was preceded in death by her parents; her husband of 58 years; son, Gerald; grandson, Tyler Van Beek; great-granddaughter, Elise Post; brother, Andrew Den Boer; sisters and brothers-in-law, Art and Suzanne Vande Hoef, Teunis and Leona Fluit; sisters-in-law, Margaret Den Boer, Minnie Den Boer; brothers-in-law and sisters-in-law, Peter and Gert Van Beek, Jim and Agnes Blom, Wm S. and Everdena Koedam, Nick and Adriana Van Beek, Mease Van Beek and Simon Van Beek.
To order memorial trees or send flowers to the family in memory of Rena Van Beek, please visit our flower store.