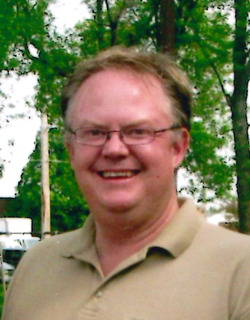 
Rock Valley, IA: Ric Kooistra, age 50, of Rock Valley, Iowa died Wednesday, February 15, 2017, at Avera McKennan Hospital in Sioux Falls, South Dakota. Funeral services will be held Saturday, February 18, at 10:30 AM at Trinity Christian Reformed Church in Rock Valley with Pastors Stanley Groothof and Dan De Groot officiating. Burial with full military honors will be held after the service at Valley View Cemetery. Visitation, with family present, will be Friday, February 17, from 6:00 to 8:00 PM at Trinity Christian Reformed Church. Memorials may be given to Hope Haven International.

Richard Gale Kooistra, son of Erwin and Alma Kooistra, was born June 20, 1966, at Rock Rapids, Iowa. Ric grew up in various locations in the Rock Valley area. He attended Rock Valley Christian School and Western Christian High School, graduating in 1984. Following graduation from high school, Ric joined the United States Air Force. He was stationed at various locations in the US, and did an overseas assignment at Comiso Air Station on the island of Sicily. He was honorably discharged in 1988.

Following discharge from the military, Ric took employment at the South Dakota State Penitentiary for several years. He then moved back to Rock Valley where he was employed for a time at Valley Machining and eventually at Hope Haven International, where he supervised inmates and volunteers in the refurbishing of wheelchairs for distribution all around the world. He was married briefly, and developed close relationships with his step-children, Carley, Daniel and Daley Hoogendoorn. Ric’s favorite things were his family, gospel music, time with youth from the church and the Minnesota Vikings.

He was preceded in death by his grandparents John and Fannie Kooistra and Frank and Berdella De Boer; his cousins Barb Brummel, Kurt and Brian Kooistra, and Connie Courtright. Blessed be his memory.

To order memorial trees or send flowers to the family in memory of Ric Kooistra, please visit our flower store.