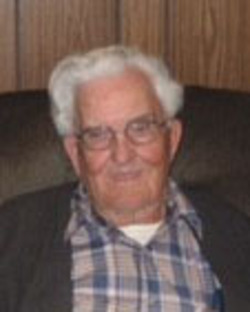 
HAWARDEN, IOWA ~ Richard Lloyd Millikan, 91, of Hawarden, Iowa died on Friday, January 6, 2017 at the Hawarden Regional Healthcare Hospital in Hawarden, Iowa. A Memorial Service will be 2:00 p.m. Saturday, June 3, 2017 at the Porter Funeral Home in Hawarden with Rev. Barb Joy officiating. Condolences may be sent to www.porterfuneralhomes.com.

Richard Lloyd Millikan was born December 22, 1925 in Hawarden, Iowa, the son of Lloyd and Vivian Mae (Cooper) Millikan. He attended school in Hawarden.

Richard married Beryl Harkness on November 18, 1945 in Sioux City, Iowa. They made their home in Hawarden. He worked as a mechanic for Truesdell Motors and later worked at Coilcraft, Inc. doing building and grounds maintenance until he retired in 2002 at the age of 77.

Richard was a quiet man but loved his wife, sons and grandchildren deeply. Richard enjoyed watching and listening to birds, tending to his garden and spending time with his grandchildren.

He was preceded in death by both of his parents; his wife, Beryl; two sons, David and Erwin; a sister, Carol Millikan; a brother-in-law, J. Rolland McGinnis; a brother-in-law, Alvin Harkness; and sisters-in-law, Bernice Dimmick, Benita Livingston and Beatrice Hall.

To order memorial trees or send flowers to the family in memory of Richard Millikan, please visit our flower store.