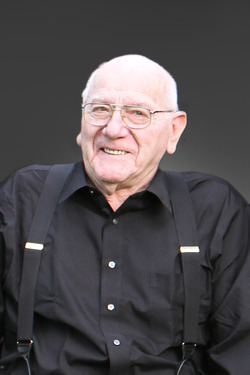 Richard Gerard Van Otterloo, son of John and Dora (Brouwer), was born on October 17, 1929 at the family home in Rock Valley, IA. He was one of 9 siblings. He married Lyda Koedam on June 23, 1950. They made their home in Rock Valley and later moved to an acreage outside of town where they raised eight children.

He had a strong work ethic from an early age and was a steadfast provider for his parents and family. His work life started in earnest at age 12 after graduating 8th grade, he worked for Hi-way Chevrolet as an auto mechanic and then their parts/service manager for 46 years.

Rich and Lyda enjoyed travelling with their family including many trips to see his siblings in California. Alaska, Hawaii and England were among the places they toured. Rich was a history buff and enjoyed seeing the places he had read of, especially in London. Richard died Wednesday April 12, 2017, at Hegg Memorial Hospital in Rock Valley, Iowa at the age of 87.

Richard was preceded in death by His parents and brother Harold and infant sister, Grace, his granddaughters Melisse Lange and Shawn Rozeboom.

To order memorial trees or send flowers to the family in memory of Richard Van Otterloo, please visit our flower store.