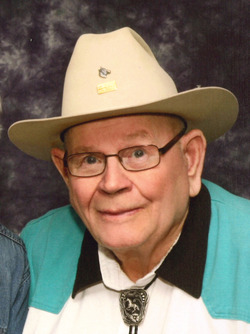 Hawarden, IA: Richard “Dick” Weyen, 85, died Friday, September 28, 2018 at Hillcrest Health Care in Hawarden. Funeral services will be held Wednesday, October 3, at 10:30 AM at Trinity Lutheran Church, LCMS of Hawarden with Rev. Joshua Lowe officiating. Burial will follow at Grace Hill Cemetery in Hawarden. Visitation, with the family present, will be held Tuesday, October 2, from 5:30-7:00 PM at the church. A prayer service will follow the visitation, beginning at 7:00 PM at the church. Condolences may be left for the family at www.porterfuneralhomes.com.

Richard “Dick” Weyen, son of Henry and Viola (Marienau) Weyen, was born February 21, 1933 at the family home in Plymouth County, Iowa. Dick grew up on the farm and helped farm until 1950 when he was drafted into the United States Army during the Korean War. After serving two years, he was honorably discharged. Dick was united in marriage with Velda Westergard on January 30, 1960. Velda died March 10, 1987. Dick married Karen Kay Peck on November 12, 1987.

Dick was an electric lineman for the City of Hawarden for twenty years. He then managed Kerr-McGee gas station at the corner of Highway 10 & 12 in Hawarden for twenty-five years. His true passion was raising and showing quarter horses. He was a lifetime member of the AQHA. Dick received top awards for his outstanding show qualities. He showed a Grand Champion Stallion in Minnesota. He had high-point awards in Iowa, South Dakota, and Minnesota for several years. Dick’s competitors hated to see him come to compete because he’d always win! Dick was also a member of the Trinity Lutheran Church, LCMS, Hawarden Saddle Club, and past member of the Hawarden Fire Department.

To order memorial trees or send flowers to the family in memory of Richard "Dick" Weyen, please visit our flower store.