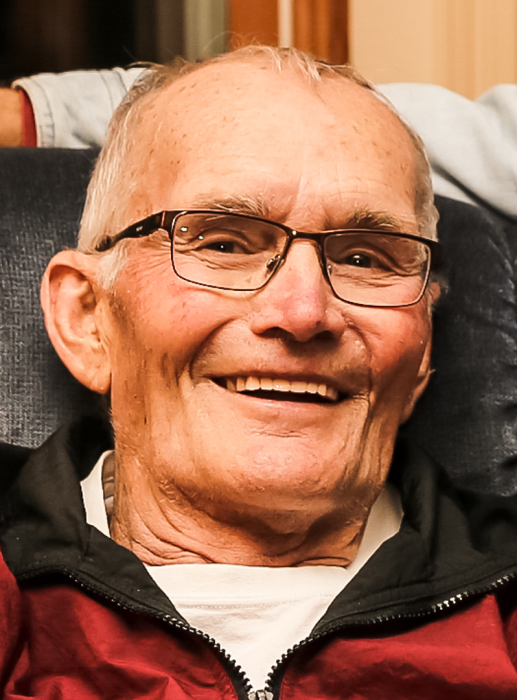 Due to COVID-19, Services for Mr. Roger Schlotfeldt have been altered in response to the State of Iowa's Public Health Disaster Emergency. Updated service information can be found below.

With sorrow in our hearts, we announce the passing of Roger Schlotfeldt of Alvord, Iowa.

On Friday, March 13th at the age of 86, surrounded by his family, with his signature wit and grit intact, Roger assured all of us he would be okay and courageously put down his fight with cancer.

Private Mass of Christian Burial will be held at St. Mary’s Catholic Church in Larchwood, Iowa with Father Francis Makwinja celebrating the mass. Burial will follow at St. Mary’s Cemetery in Alvord. Public Viewing, with a limit of 10 people in the building at a time, will be held Thursday, March 19th from 1:00-5:00 PM at Porter Funeral Home in Rock Valley, Iowa. Another public viewing, with the same 10 person limit, will be held Friday, March 20th from 1:00-5:00 PM at St, Mary’s Catholic Church in Larchwood. There will be no family present at the public viewings. Porter Funeral Home of Rock Valley is assisting the family with arrangements. If unable to attend the public viewings, please feel free to leave a message for the family at www.porterfuneralhomes.com.

Roger, one of ten children, lived his whole life in Alvord, leaving only for two years to serve his country in the Army.  Upon his return, he made it clear to Bernadine Roemen that she was the love of his life and so together they embarked on a 65-year adventure that blessed them with seven children, 20 grandchildren, 15 great-grandchildren and a tapestry of cherished memories that will weave into many future generations.

Those of us who were lucky enough to call Roger a friend knew how special he was.  He loved helping you, whether that meant fixing your tractor or just spending time in the chicken house listening to your story.  He was an easy-going, scotch-loving friend to all and boy could he make you laugh!  Whether creating “Rogerisms”: “I like eating at Ruby Thursdays” or accidentally wearing Bernadine’s jeans-thinking they were his; he not only brought a smile to your face, he just made you feel loved.

Rog was a true farmer, the kind that could grab a handful of soil and know if it was going to be a good season.  So deep was his passion for farming, that he worked a full-time job for 28 years lugging beef at the IBP packing plant so that he could provide for his family and still farm his land.  During these years he also made it a priority to contribute to his community and be involved in the lives of his children and grandchildren as much as possible.   He raised his kids to be hard-working, self-sufficient and well disciplined; actually, that was Bernadine, however, there’s no doubt he instilled in them the value of integrity and the importance of a kind and forgiving heart.  He guided them through the perils of life and branded their memories with these utmost critical words: “Watch out for trains!”

It’s a rare thing to meet a person who gives more than they take, who overcomes life’s hardships with a sense of gratitude.  A person who devotes their life to working hard and doing the right thing every day.  Someone so humble and selfless, they lift us up and remind us that what really matters in life is finding joy in the simple things.  Roger Schlotfeldt was that husband, that father, that grandfather/great grandfather, that friend, that farmer, that gardener.  He was that man and his spirit will forever live in the hearts of all those who knew and loved him.

To order memorial trees or send flowers to the family in memory of Roger F. Schlotfeldt, please visit our flower store.