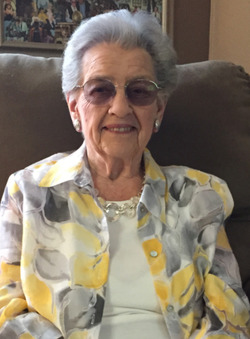 Rose Marie Gacke, daughter of Jacob and Elizabeth (Van Cruchten) Daniels, was born on the family farm north of Larchwood, Iowa on August 27, 1921. She graduated from St. Mary’s Catholic School in Larchwood in 1940. Rose was united in marriage with Anthony Gacke on April 10, 1945 at Larchwood. They had five children, Carol, Joe, Pat, Steve, and Nancy. Together they farmed southwest of Alvord, Iowa until 1957. The farm was sold so the family moved to a farm southwest of Rock Valley, Iowa until retiring in 1984. Rose always wanted to be a nurse, so when the nursing home was built in Hudson, South Dakota, she worked as a CNA and Med Aide for 17 years. When the couple moved to Rock Valley, she worked at Valley Manor for 9 years. The couple moved to Whispering Heights of Rock Valley in 2014. Anthony died April 3, 2016 at the age of 97. The couple was married 71 years.

Rose enjoyed dancing with Anthony, playing cards with friends and family, gardening, embroidering, and traveling. She helped make fleece tie blankets which were given to babies born at Hegg Memorial Health Center in Rock Valley. Rose was a member of St. Mary’s Catholic Church of Rock Valley.

To order memorial trees or send flowers to the family in memory of Rose Gacke, please visit our flower store.