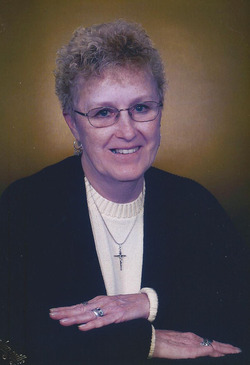 Memorial Service will be 10:30 a.m. Wednesday, May 10, 2017 at the St. John’s Lutheran Church rural Ireton, Iowa with Rev. David Daumer officiating. A luncheon will follow the service. Visitation with the family will be in the church hall one hour prior to the memorial service. The Porter Funeral Home in Hawarden, Iowa is assisting the family. Condolences may be sent to www.porterfuneralhomes.com.

Sharon spent her early years in Minnesota where later her family moved to Maurice, Iowa. She graduated from Maurice-Orange City High School. After graduation, she married Arlan Reinking on June 2, 1961 at St. Paul’s Lutheran Parsonage in Ireton. They resided in Sioux City, Iowa for one year before moving back to Ireton. She worked for various employers including the Ireton Vet Clinic, Otis Coilcraft Radio, Hope Haven, The Super Stop, Sioux Empire College and West Sioux Community Schools where she was the Head Cook. After the death of her husband, she moved to Hawarden, Iowa and later to Cherokee, Iowa to be closer to her children and grandchildren. Sharon was a member of St. Paul's Lutheran Church in Ireton and later attended church at Trinity Lutheran Church in Hawarden.

Sharon loved spending time with her sisters, friends and grandchildren. She treasured visits from her great granddaughters. She enjoyed crocheting, sewing, painting, ceramics, watching sports, babysitting the grand-dogs, and bingo. She made many beautiful and unique items for family and friends.

Preceding her in death were her husband, Arlan Reinking, a son Randy Reinking, her parents, a brother Bob Brunk and a brother-in-law Larry Wielenga.

In lieu of flowers, the family requests memorials be made in Sharon's name to Lakes Regional Healthcare Hospice.

To order memorial trees or send flowers to the family in memory of Sharon Reinking, please visit our flower store.