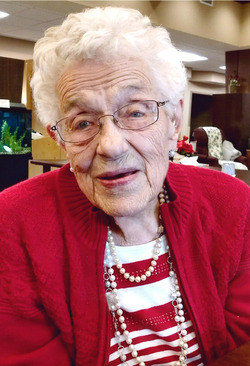 Sophia was born December 29, 1915 on a farm near Carnes, Iowa, daughter of Cornelius and Maggie (Scheeringa) Siebersma. Sophie grew up on this farm and attended country school through 8th grade. She enjoyed working with her dad on the farm but also had a variety of jobs in town. Two of her favorite were being the cook at the Orange City Hospital and working at Geselschap Drug Store in Orange City. During WWII Sophie worked in personnel at Douglas Aircraft in California. She was also honored to be on the Tulip Queen Court in 1941.

On June 12, 1947, she married Richard E. Van Zee in Orange City, IA. They made their home in Rock Valley, IA where they raised their 3 daughters. Sophie thoroughly enjoyed being a wife and mother. She was a great cook and baker. She loved gardening, bowling, golfing, knitting & crocheting. She was an active member of First Reformed Church where she sang in the choir, helped with Bible School and participated in the women’s ministries. After Rich’s retirement they enjoyed 20 years of winters in Arizona with family & friends. Rich passed away on March 17, 1993. In 2000 Sophie moved into 4 Seasons and in 2010 moved into Whispering Heights. She loved her caregivers and many of them thought of her as “their” grandma Sophie.

Sophie accepted Jesus as her Lord and Savior early in life and sought to live for Him and share His love and grace with others. She was a loving wife, mother and grandmother. She now rests from her earthly labors and is safe in the arms of her Lord.

To order memorial trees or send flowers to the family in memory of Sophia "Sophie" Van Zee, please visit our flower store.