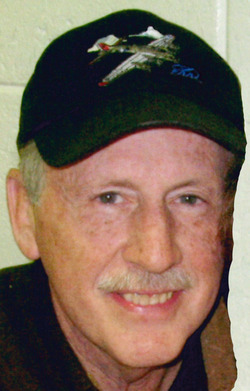 
Hawarden, IA: Stuart Flynn, 79, of Monticello, Georgia, formally of Hawarden, Iowa, passed away Wednesday, May 2, 2018 at Hawarden Regional Healthcare. Funeral services will be held Wednesday, May 9 at 2:00 PM at Porter Funeral Home in Hawarden with Pastor Brian Quall and Pastor Wayne Wasta officiating. Burial will follow at Grace Hill Cemetery in Hawarden. Visitation, with the family present, will be held one hour prior to the service at the funeral home. Memorials may be given to the Hawarden Historical Society.

Stuart was an avid comic book collector and had a WWII collection of “Homefront” items. He was involved in WWII memorials, recognizing many flight crashes and victims. In his early youth, he was a prolific backpacker. Stuart was a charter member of the “Spike Club”. He was a former member of the Associated Church in Hawarden. He moved to Georgia and was married to Andrea Knudson on May 24, 2009. He became a stepfather, grandfather and great grandfather. He was a resident of Turtle Cove on Jackson Lake.

Stuart was preceded in death by his parents, Walter and Carrie.

To order memorial trees or send flowers to the family in memory of Stuart Flynn, please visit our flower store.