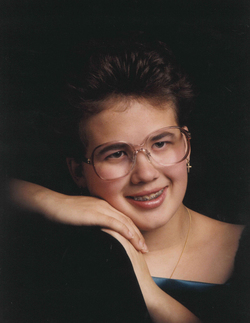 Sylvia Christine Mathison was born April 28, 1974 at Oak Harbor, Washington, daughter of Ben and Mary Jo (Brown) Mathison. She graduated from high school at Widefield, Colorado and then being a military child, she lived various places in the United States and Germany. Sylvia obtained an associate degree at NCC at Sheldon, Iowa and then was a cook at Good Samaritan Center at Canton, South Dakota and later at Bethesda at Beresford, South Dakota. She enjoyed visiting with the residents at the nursing home, doing bead work, and family genealogy.

Sylvia is survived by her parents, Ben and Mary Jo of Rock Valley; sisters, Heather (John) Walbran of Liberty, Missouri and Michelle Mathison of Rock Valley; nephews, Cameron and Calvin Walbran; and many aunts, uncles, and cousins.

She was preceded in death by her grandparents, Lloyd and Lorena Brown, and Mervin and Ruth Mathison.

To order memorial trees or send flowers to the family in memory of Sylvia Mathison, please visit our flower store.