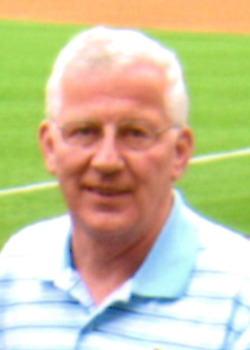 From 1969-1972, Terry proudly served his country as a member of the United States Army. He was stationed in Germany and Thailand. Terry was united in marriage with Pat Eilts on July 17, 1974 in Hawarden. The couple made their home in Hawarden, where Terry worked as a welder until 1976 when he began working at Hawarden Lumber. In 1986, Terry became the manager of Schoeneman Brothers Lumber, a position that he held until his passing.

Terry enjoyed being a part of the Hawarden community. He was a hard worker and loved his job at Schoeneman's. Terry was a proud supporter of the West Sioux School District and spent many years volunteering his time at track meets. He was a member of Trinity Lutheran Church and the Hawarden American Legion. In addition to his local commitments, Terry sat on several boards and committees for state and national Lumber Associations; including the Iowa Lumber Association, South Dakota Retail Lumbermen’s Association, and the Northwestern Lumber Association.

He was preceded in death by his father, Kenyon Karr; sister, Rhonda Wilkie; and mother-in-law, Bernice Eilts.


To order memorial trees or send flowers to the family in memory of Terry Karr, please visit our flower store.