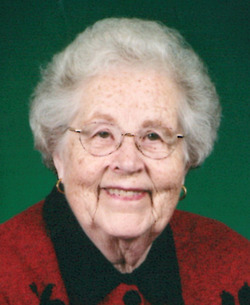 Tillie Kooi was born on a farm south of Doon, Iowa on March 16, 1920 to Neal and Bertha (Scheltema) Vanden Bosch. Her mother died in 1928. In 1930 her father remarried and the family moved to Estelline, South Dakota where Tillie attended country school through the 8th grade. She took housekeeping jobs in Estelline and later in Lebanon where she moved in 1936. Tillie met Lewis Kooi while attending the Lebanon Church and were married on February 13, 1941. Tillie moved to Little Rock, Arkansas, in 1943 where Lewis was stationed at Camp Fannin and later that year to Tyler, Texas. They lived there 8 months until Lewis was shipped over to Normandy as a replacement. When Lewis returned home they moved to Rock Valley, Iowa area, where they raised their 6 sons. Lewis passed away on April 12, 1984. They were charter members of Calvin CRC in Rock Valley. Tillie did upholstery work from 1966 to 1984. She was a member of Harmony Workers and Faith Circle for which she was secretary for many years. Tillie was a volunteer for Hope Haven for 12 years, repairing wheelchairs and for the Senior Citizens for 10 years. Tillie enjoyed playing Skipbo with her grandkids and would always win. She also enjoyed bowling, craftwork and crocheting. She loved to laugh and tell stories and she always had a smile. She continued to share her faith throughout her life and into her final days; confident she would soon be entering into her heavenly home.

She was preceded in death by her parents; husband Lewis; 2 sons, Don and Larry Kooi; 3 brothers; 5 sisters; and 1 grandchild.

To order memorial trees or send flowers to the family in memory of Tillie Kooi, please visit our flower store.