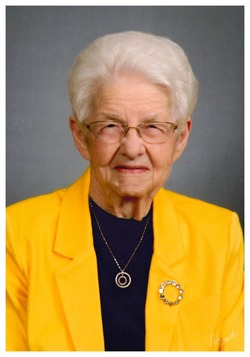 
Sioux Falls, SD: Veronica Scholten, 93, of Sioux Falls, South Dakota, formerly of Larchwood, Iowa, died Friday, March 2, 2018 at Avera Prince of Peace in Sioux Falls. Mass of Christian Burial will be held Saturday, March 10 at 10:30 AM at St. Mary’s Catholic Church of Larchwood with Father Joseph Scholten and Father Francis Makwinja celebrating the Mass. Burial will follow at Larchwood Cemetery. Visitation, with the family present, will be held Friday, March 9 at the church from 6:30-7:30 PM. A prayer service will follow the visitation at 7:30 PM.

Veronica Agnes Snyders, daughter of Joseph and Lorena (Ripperda) Snyders, was born on June 27, 1924 at Larchwood, Iowa. She graduated from St. Mary’s Catholic High School in Larchwood in 1942. On October 17, 1944 Veronica was united in marriage with Joseph Scholten at St. Mary’s Catholic church in Larchwood. They made their home on an acreage southwest of Larchwood where they raised their 14 children grounded in the Catholic faith. In 1987, she moved to Dell Rapids, South Dakota. Joe died on September 27, 1997. Veronica moved to Prince of Peace in Sioux Falls, South Dakota in January 2013.

Veronica was a loving and devoted wife, mother, and grandmother. She had a special devotion to Mary, praying at least one rosary daily. She was a member of St. Mary’s Altar Society in Larchwood and the Legion of Mary Altar Society in Dell Rapids. Veronica mastered embroidering, she enjoyed bowling, playing cards, Minnesota Twins baseball, fishing outings with Donald and Helen, and later in life she enjoyed the trips with her siblings. She treasured all the times and traditions shared with her family and friends.

To order memorial trees or send flowers to the family in memory of Veronica Scholten, please visit our flower store.