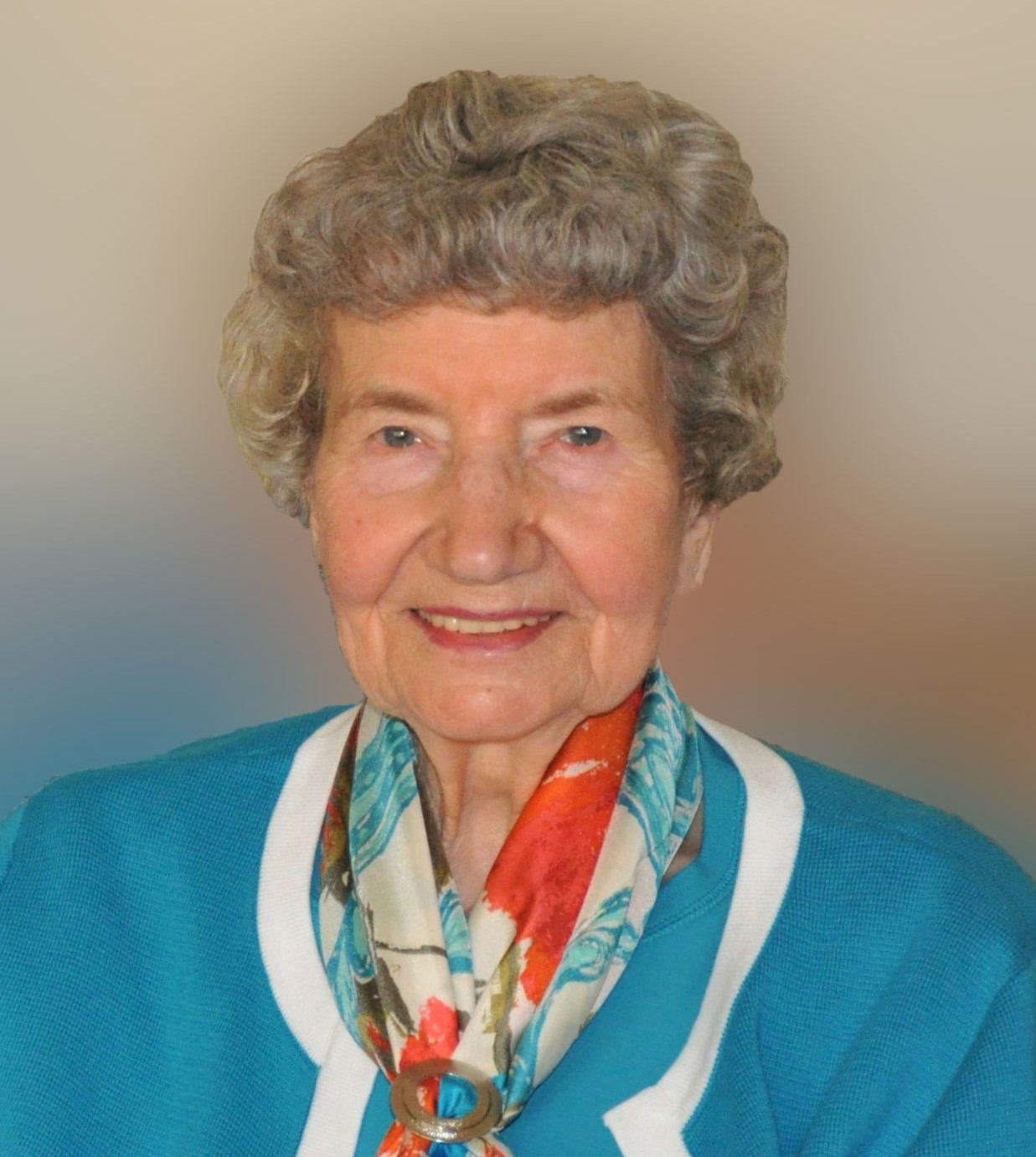 Private family graveside service was held at Grace Hill Cemetery. A Celebration Of Her Life service, with the public invited, is 11:00 a.m. Saturday, May 14, 2022 at the United Methodist Church in Hawarden. Her family prefers memorials be directed to the Hawarden United Methodist Church, West Sioux Educational Foundation, Hawarden Regional Healthcare Foundation, or the Hawarden Library in Vi’s memory.

Violet (Vi) Iverson was born February 26, 1922, on a farm near Wisner, Nebraska. Her parents were Alfred and Lucy (McCauley) Jones. She was the youngest of their six children.
Vi attended a rural school near her family’s farm. She and her neighbor walked the two miles to and from school in the spring and fall, often crawling in the ditch to avoid drawing the attention of a neighbor’s cantankerous bull. Later, the walks to and from school were replaced by pony rides – Vi sitting behind the saddle and enduring the jarring bumps of a trotting horse. From the first day, school became Vi’s world. She relished the opportunity to read all the books in the small school library.
In 1935, Vi started Wisner High School. Making the transition from a country school to a larger high school was quite an adjustment. One of Vi’s high school teachers commented, “You country kids came crawling in from the cornfields, but most of you knew how to study!”
After graduating from high school, Vi began teaching in rural schools at the age of 17. The one-room school buildings in which she taught were typical of that era – a wooden floor, a pot-bellied stove, and desks made to accommodate two students with water for the students coming from an outside pump. As part of her teaching responsibilities, she started the fire in the school’s stove each morning and carried out the ashes nightly.
In 1943, Vi attended summer school at Wesleyan University in Lincoln, Nebraska. That summer school experience convinced her that she wanted a college education. (At that time, everyone scoffed at the idea of a person attending school for 4 years to teach young children since elementary school teachers were required to have just two years of college.)
It was during her summer at Wesleyan University in Lincoln that Vi met her future husband, Whitey Iverson. Whitey was in pilot training and temporarily housed with other soldiers on Wesleyan’s campus. When Whitey left Lincoln for additional training, he and Vi continued to keep in touch by exchanging letters and pictures. Upon his graduation from the Air Force’s Pilot School, Whitey made a surprise visit to Lincoln where he proposed to Vi. They were married on August 8, 1945. When the new couple called their parents to give them the news, Whitey’s mom feared that he had married a “camp follower,” while Vi’s mom cried because her daughter had married a “fly-by-night fly boy”. Despite their parents’ concerns over the sudden union, Vi and Whitey’s marriage lasted for 69 years!
Vi graduated from the University of Nebraska in January, 1947, with a degree in elementary education. The head of the education department was a strong influence on Vi’s attitude toward education and teaching. One famous bit of advice the department head gave to her students was, “Don’t spend your first year’s salary on a fur coat. A cloth coat can be just as attractive.” After her graduation, Vi secured a teaching position in 5th and 6th grade in the Lincoln public schools while Whitey continued at the university’s Ag College.
In the spring of 1948, Whitey graduated from Ag College and interviewed for a teaching position in Hawarden. During the interview, Whitey indicated to Mr. Britzmann, the school superintendent, that his wife also desired a job. Vi sent her credentials, and a few days later the superintendent offered both of them teaching positions without even interviewing her! (Candidates for teaching positions were scarce at the time!)
For 32 years, Vi taught her favorite grade – kindergarten. She loved teaching that age because of how much growth she saw in her students – often in life skills as simple and necessary as learning to tie shoes or zip a zipper. One of the advantages of living in Hawarden for so many years was the opportunity to see her former students continue through high school and become parents and active leaders in the community.
Following her retirement in 1984, Vi became an active volunteer. She volunteered at the Thrift Shop for 27 years, served on the Hospital Auxiliary Board, Library Board, and was an advocate at Hillcrest for 20 years. Vi was named Hawarden’s 2010 Citizen of the Year. She was also active in P.E.O., Mutual Improvement Club (M.I.C.), United Methodist Women and the Methodist Church, including being a Happy Hugger in the Clown Ministry of the Methodist Church for several years.
In addition to her other activities, Vi loved ballroom dancing. Her older sister taught her to dance when she was 6 years old. She especially enjoyed the Big Band era of music and dance. She was also an avid reader and a strong believer in exercise. Her life motto was “Treat others the way you like to be treated.”
Vi is survived by her daughter, Lynn, her son-in-law, Rick Pittard, and her grandson, Kris Pittard, in addition to several nieces and nephews. She was preceded in death by her husband, Elwood (Whitey), her parents, and five siblings: Mary Bolton, Lucy Pemberton, Margaret Thorman, Nettie Glaubius and George Jones.

To order memorial trees or send flowers to the family in memory of Vi Iverson, please visit our flower store.
Open