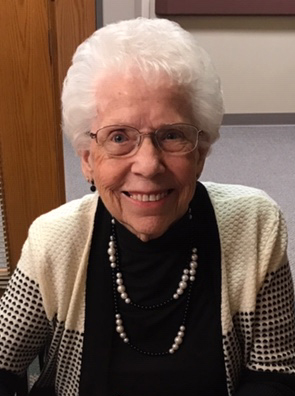 Violet Mae (DenBesten) Engbers, daughter of Edward and Jennie (Keuning) DenBesten, was born January 9, 1929 at New Holland, South Dakota. She was united in marriage to John H. Engbers on March 27, 1948 at Pella, Iowa. To this union, three children were born; Sheryl, Wesley, and Kevin.

Violet’s love of her Lord and Savior was demonstrated in her love of family and serving alongside her husband Rev. John, pastoring various churches in Rock Valley, Iowa; Cutlerville, Michigan; and Chandler, Minnesota until their retirement in 1994. Vi enjoyed various hobbies including knitting, quilting, and cross-stitching. Those who knew Vi well would describe her as spunky. If she started a project, she didn’t stop until it was completed.

John and Vi spent many summers enjoying Happiness Resort in Northern Minnesota where she would proudly tell you she was able to water ski until age 72. She also enjoyed angling, but was wary of the responsibility of having to net John’s fish.

Violet was preceded in death by her parents, Ed and Jennie DenBesten; her husband, John Engbers; three sisters; and seven brothers.

To order memorial trees or send flowers to the family in memory of Violet M. Engbers, please visit our flower store.