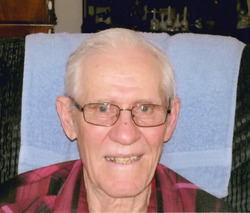 
Alcester, South Dakota ~ Walter Holtkamp, 96, of rural Alcester, passed away on Friday, May 5, 2017 at the Dougherty Hospice House in Sioux Falls, South Dakota.

He served in World War II from October, 1942 to February, 1946. After his discharge, he farmed near Hawarden and later near Alcester, SD. He lived on the farm until June of 2015 when he became a resident at the Alcester Care Center.

Walter was married to Gladys Knaack on May 25, 1952 at Pierson, IA. Gladys passed away on July 1, 1994. On April 26, 1996, he married Johanna (DeVos) Medema at Big Springs Baptist Church in rural Alcester. Walter’s favorite past time was dancing and music. He also enjoyed gardening and baking pies and cinnamon rolls which he generously shared with many people.

He was preceded in death by his parents; his first wife, Gladys; two brothers, Wendel and Herman; and three sisters, Louise Holtkamp, Dorothy Heiman, and Margaret Heiman.

To order memorial trees or send flowers to the family in memory of Walter Holtkamp, please visit our flower store.