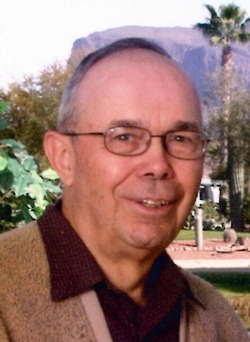 Walter Charles Moore, Jr., son of Walter and Minnie (Gayer) Moore Sr., was born October 3, 1932 at the family farm in Sioux County, Iowa. Junior attended country school through the eighth grade and graduated from Rock Valley High School. Junior went on to proudly serve his country as a member of the United States Army during the Korean War. On June 2, 1961 Junior was united in marriage with Shirley Ranschau. Together the couple farmed until retiring and moving into Rock Valley in 1996. During retirement, Junior and Shirley enjoyed many winters in Arizona.

Junior was a sports enthusiast. He enjoyed watching and reading about sports; he especially liked rooting for the Chicago Cubs and attending Boyden-Hull/Rock Valley Nighthawk baseball and softball games. Junior also enjoyed going back out to the fields after retirement to check on the crops and to pull and spray weeds. Junior was a member of Peace Lutheran Church where he served on church council and he also served on the Farmers Elevator Board.

To order memorial trees or send flowers to the family in memory of Walter "Junior" Moore, please visit our flower store.