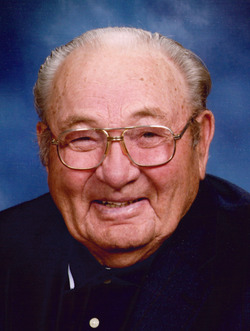 
Inwood, IA: Walter Ranschau, 90, of Inwood, Iowa, died peacefully Sunday, February 19, 2017, at his home near Inwood. Funeral services will be Saturday, February 25, at 2:00 PM at Bethlehem Lutheran Church of Inwood with Rev. John Wolf officiating. Burial will be at Larchwood Cemetery in Larchwood, Iowa. Visitation will be held prior to the funeral service from 12:30-2:00 PM at the church. Memorials may be given to Bethlehem Lutheran Church Remodeling Fund.

Walter Claus Henry Ranschau was born June 15, 1926, in rural Rock Valley, Iowa, to Christian H. and E.C. Wanda (Wenck) Ranschau. He worked on his dad’s farm and attended country school until 8th grade. He was confirmed at Peace Lutheran Church. Walter was hired by Oscar and Emma Miller to help out on their farm for 3 years. Just after he turned 18, he joined the army and left on a train from Alton, Iowa. During World War II, he served from 1944–1946. He spent much of his time on the island of Leyte in the Philippines. Shortly after he returned home, Walter met his sister’s pen pal from Washington State. It was love at first sight. He married Mary Louise Wilder on January 2, 1949. Together, they farmed and raised 10 children. Walter found time to teach Sunday School, help with the youth in church, drove school bus for West Lyon Community School for many years, and got his GED from Northwest Iowa Community College. Mary and Walter were the 1983 “Parents of the Year” at Northwestern College.

In October of 2010, he had the privilege to go on the Honor Flight to Washington, DC. He was a long time member of Bethlehem Lutheran Church in Inwood. Walter loved spending time with his family, attending sporting events, eating out, playing UNO, going to church, singing hymns, dancing, sharing his thoughts and his hearty laugh. Walter’s favorite hobbies were tending his cow/calf herd and learning the all he could about farming.

To order memorial trees or send flowers to the family in memory of Walter Ranschau, please visit our flower store.