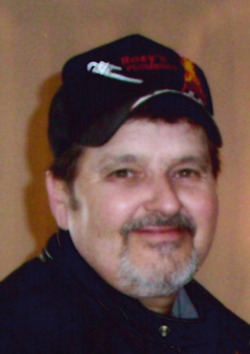 Wesley Gene Rozeboom, son of Herman and Albertha (Bonestroo) Rozeboom, was born November 5, 1953 at Sioux Falls, South Dakota. Wes attended and graduated from Lincoln High School in Sioux Falls. He later moved to Kentucky where he was a master plumber and was the owner and operator of Rozy’s Plumbing. After his plumbing career, Wes settled in Rock Valley, Iowa.

In his younger years, Wes played fast-pitch softball. He was a pitcher and was South Dakota’s most valuable player one year. He also enjoyed NASCAR and Harley Davidson Motorcycles. Wes had a love for dogs and had a special bond with Ella; a dog he and his sister shared.

Wes is survived by his two sons, Ryan and Chris Rozeboom of Kentucky; mother, Albertha Rozeboom of Sioux Falls; brother, Randy (Jeri) Rozeboom of Lake Madison, South Dakota; and sister, Lisa Leonard and her special friend, Ken Baker of Sioux Falls. He was preceded in death by his father, Herm.

To order memorial trees or send flowers to the family in memory of Wesley "Wes" Rozeboom, please visit our flower store.