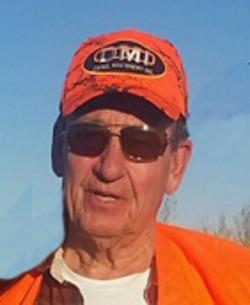 There may never be anyone who loves their hometown as much as Bill Van Maanen loved his. On April 4, 1936 William James Van Maanen was born in Rock Valley, Iowa. From that day to the day he died on Friday, September 15, 2017, the only time that Bill did not live in his beloved Rock Valley was during the two years he served in the United States Marine Corp at Camp Pendleton. Bill was deeply proud of and devoted to his hometown.

Always keeping Rock Valley’s interests in mind, in the 1980s Bill and friend Willie Jonker bought a historic railroad bridge to keep it from being dismantled while funds were raised to make the bridge part of what today is the Rock Valley trail system.

If you spoke with his three children and seven grandchildren, each one would tell you that their Papa was among their closest friends and they loved hearing him tell stories about Rock Valley. His wife Jo would tell you that Bill was her best friend for more than 60 years.

Bill shared his love of pheasant hunting with his sons and grandsons. He also enjoyed golfing and traveling, even taking all the grand kids on many trips. He had fond memories of fishing trips to Alaska, and travels in Holland and Germany. He loved solving crosswords puzzles and collecting rocks.

Visitation will be Tuesday from 5:30 to 7:30 p.m. at Porter’s Funeral Home in Rock Valley. The funeral service will be Wednesday at 10:30 at Pioneer United Methodist Church. Pastor Donald Nelson will officiate.

And just as it should be, memorial contributions may be made to the Friends of Rock Valley.


Memorial Donations Memorial donations can be made to:
Friends of Rock Valley

To order memorial trees or send flowers to the family in memory of William "Bill" Van Maanen, please visit our flower store.