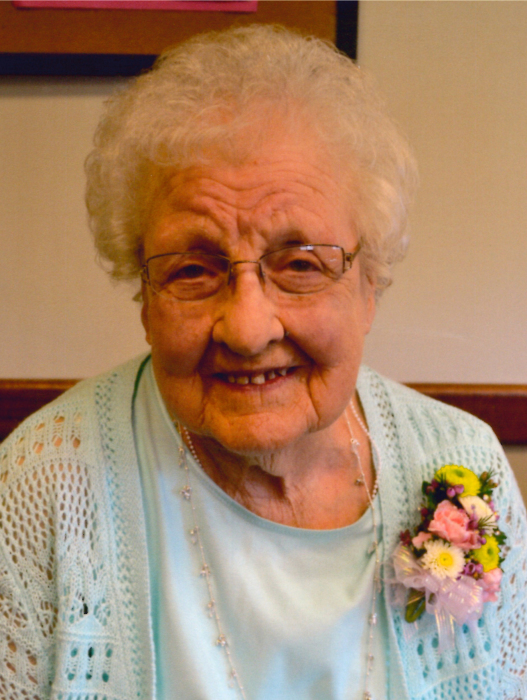 George, IA: Wilma Altena, 93, of George, Iowa, passed away Wednesday, July 10, 2019 at the Good Samaritan Society of George, Iowa. Funeral services will be held Friday, July 12, at 2:00 PM at Porter Funeral Home in Rock Valley, Iowa with Rev. Loren Kotman officiating. Burial will follow at Valley View Cemetery of Rock Valley. Visitation, with the family present, will be held from 1:00-2:00 PM prior to the service. In lieu of flowers, memorials may be directed to Hope Haven.

Wilma Altena, the daughter of William and Jennie (Vugteveen) Wynia, was born April 6, 1926 in Rock Valley, Iowa. Wilma married Sam Altena on February 18, 1948 at the First Christian Reformed Church in Rock Valley. The couple made their home on a farm SW of George, Iowa. While on the farm, Wilma enjoyed working alongside Sam. She would drive tractor as needed and raised chickens. Upon retiring in 2008, the couple moved to an apartment in George. Sam died on January 10, 2012. After Sam’s death, Wilma moved to Aspen Heights in Hull, Iowa and later the Good Samaritan Society in George. She enjoyed the good friendships she made in these facilities over the years.

Wilma had a great love for her family. She always enjoyed the grandchildren and great-granddaughters coming to see her. Wilma was a fan of the Minnesota Twins. She was a member of the First Christian Reformed Church in Hull.

She was preceded in death by her parents, William and Jennie; husband, Sam; daughter, Lorna Altena; and son-in-law, Ron Healy.

To order memorial trees or send flowers to the family in memory of Wilma Altena, please visit our flower store.