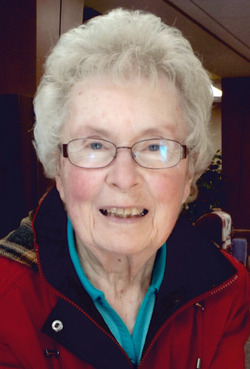 Wilma Baatz was born October 17, 1938 in Sioux Center, Iowa, the daughter of Dick and Minnie (Van Ravenswaay) Vander Linden. On July 21, 1960, Wilma was united in marriage to Francis Baatz. Together the couple made their home in Rock Valley. Wilma was very involved at First Reformed Church where she participated in women’s ministry, taught Sunday School and attended Bible studies. After Francis died, she worked as a housekeeper at Four Seasons. In Wilma’s spare time she enjoyed embroidering dish towels, bowling, golfing, and playing cards with friends. In her later years, she enjoyed playing Bingo at the nursing home, and listening to music.

She was preceded in death by her parents, Dick and Minnie; husband, Francis; mother and father-in-law, Louise and Matt Baatz; sisters, Gert and her husband, Pete Davelaar and Joann and her husband, Vern Sandbulte; sister-in-law, Eleanor Van Berkum; nephew, Jason Vande Hoef; and niece, Julie Anderson.

To order memorial trees or send flowers to the family in memory of Wilma Baatz, please visit our flower store.