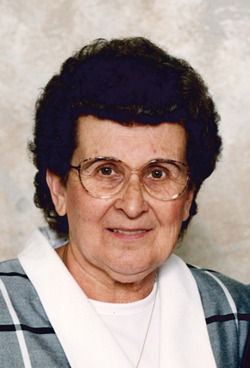 Wilma Van Roekel, daughter of Henry and Gertie (Roozenboom) Van Grootheest, was born January 2, 1934, at Fairview, South Dakota. Her family moved to a farm west of Rock Valley, Iowa when she was 15. Wilma attended country school through the 8th grade. She married Hans Van Roekel on December 14, 1955 at her parent’s home near Rock Valley. The couple first lived north of Doon, Iowa and later moved to another place north of Doon. Hans and Wilma moved into Doon on July 4, 1988. Wilma became a resident of Rock Rapids Health Center in February 2017 and then moved to Good Samaritan Society – George in July 2018.

Wilma worked at Valley Manor (Whispering Heights) for 30 years doing laundry for the residents. Wilma was kindhearted and a hard-working mother and grandmother. She was always fun loving and like to play pranks. Wilma would draw and color with the grandkids when they were little. Her love for music was life-long. She would sing and play guitar at gatherings or just to entertain herself at home. Wilma also enjoyed sewing and baking.

She was preceded in death by her parents, Henry and Gertie; father and mother-in-law, William and Willemina Van Roekel; and sister, Tena Van Muyden.

To order memorial trees or send flowers to the family in memory of Wilma Van Roekel, please visit our flower store.