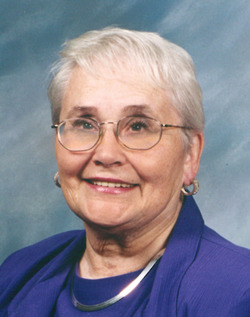 Wilma Jean (Nebben) Wynia, daughter of John A. and Myrtle B. (Moore) Nebben, was born January 13, 1932 at Flandreau, South Dakota. When Jean was 9 years old her family moved to Doon, Iowa and later Rock Valley, Iowa, where she graduated from Rock Valley High School in 1950. Jean married Pier J. Wynia on May 2, 1952 in Rock Valley. Jean worked for Iowa Public Service, now MidAmerican Energy, for 40 years before retiring in 1992. She didn’t stay retired long because from 1993-1998 she worked for McGill Law Office and from 1999-2013 she served as the church secretary for Pioneer United Methodist Church.

Jean enjoyed reading, crossword puzzles, sewing and handiwork, and playing piano and organ. She was an active member of Pioneer United Methodist Church where she became a member at age 14 and played organ at church from age 15 to age 50. Jean was a Sunday school teacher for many years, directed the youth choir, and held many church offices over the years. She was active in United Methodist Women, Hope Circle, and even served as the district conference treasurer. Jean was also a member of the Eastern Star from 1961-1992.

To order memorial trees or send flowers to the family in memory of Wilma Jean Wynia, please visit our flower store.