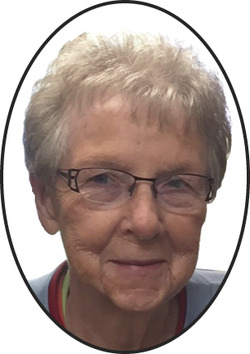 Winifred Joyce (Smith) Kooima was born March 6, 1930, in Hull, Iowa, daughter of John H and Winnie (De Vries) Smith. She lived in Sioux Center until her sophomore year of school. Her family then moved to Rock Valley where she met the love of her life, Jr. Kooima. Winifred graduated from RVHS in 1948.

Jr. and Winifred got married on June 1, 1949, in Arkansas. They lived at various Air Force bases, including Ramey Air Force Base in Puerto Rico.

Jr. and Winifred returned to Rock Valley in 1952 to raise their family of five on the farm south of Rock Valley. Winifred's days kept busy bringing delicious lunches to the guys working in the fields, taking the children back and forth to various activities while being a faithful prayer warrior. Winifred was the family seamstress. She did lots of sewing for her daughters' weddings and was the “go to” person for patches, tears, zippers and hems. Winifred loved her family. She was a wonderful wife, mother, grandmother, and great-grandmother.

Winifred was a nurse’s aide at Valley Manor (now called Whispering Heights) for 12 years. She was a member of First Reformed Church in Rock Valley, where she taught Sunday School and Catechism along with being a member of Mary Circle.

To order memorial trees or send flowers to the family in memory of Winifred Kooima, please visit our flower store.